Sometime in late Spring, when the first crops have filled the fields, mysterious designs begin to appear: crop circles, some hundreds of feet across, impressed into the living canvas. The crop is bent, not broken, in a swirling or cross-hatch pattern to create the designs, which are best viewed from the air. The phenomenon continues throughout the summer, until the final harvest is brought in.

The first photographic evidence of the circles dates from 1978, and they have been appearing with increasing regularity since the 1980s, now averaging around 120 per year worldwide. (1999 was the busiest year so far, with over 200 recorded!) The vast majority of crop circles occur in the county of Wiltshire, in southern England, an area dense with ancient sites such as Stonehenge and Avebury. The true meaning of the crop circles is unknown, as is how they are made, but the elegant geometry of the designs is undeniable. 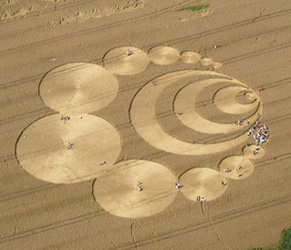 The first crop circles were just that: circles. Some had rings around them or were set in groups of three. Quintuplets came next, with four equal and evenly spaced circles surrounding a larger central circle.

In 1990, a fascinating shift occurred: “pictograms” with straight pathways and boxes began to appear. It became harder to explain away the phenomenon as a curious byproduct of whirlwinds or animal activity. Designs continued to get more elaborate—insect- and dolphin-like pictograms, fractal-edged snowflakes, spirals, a double helix. Each year brings new delights as the “Circlemakers” (as they are now known) perfect their craft. 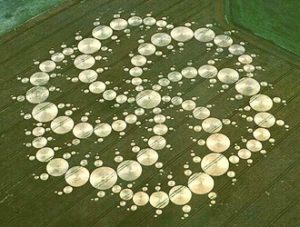 A close examination of any crop circle design will reveal that it is formed according to geometric elements, some astoundingly complex. The design above, for example, which appeared on Milk Hill in Wiltshire, England, in 2001, is based on the number 6, with 6 arms spiraling out to create an approximate hexagon. Even the more abstract, organic pictograms have an underlying geometry that lends them balance and elegance.

If you are interested in following the action each summer, here are two excellent web sites to check out:

Crop Circles and More: Up-to-date map of crop circle locations in Wiltshire and a study of the geometry of some past designs